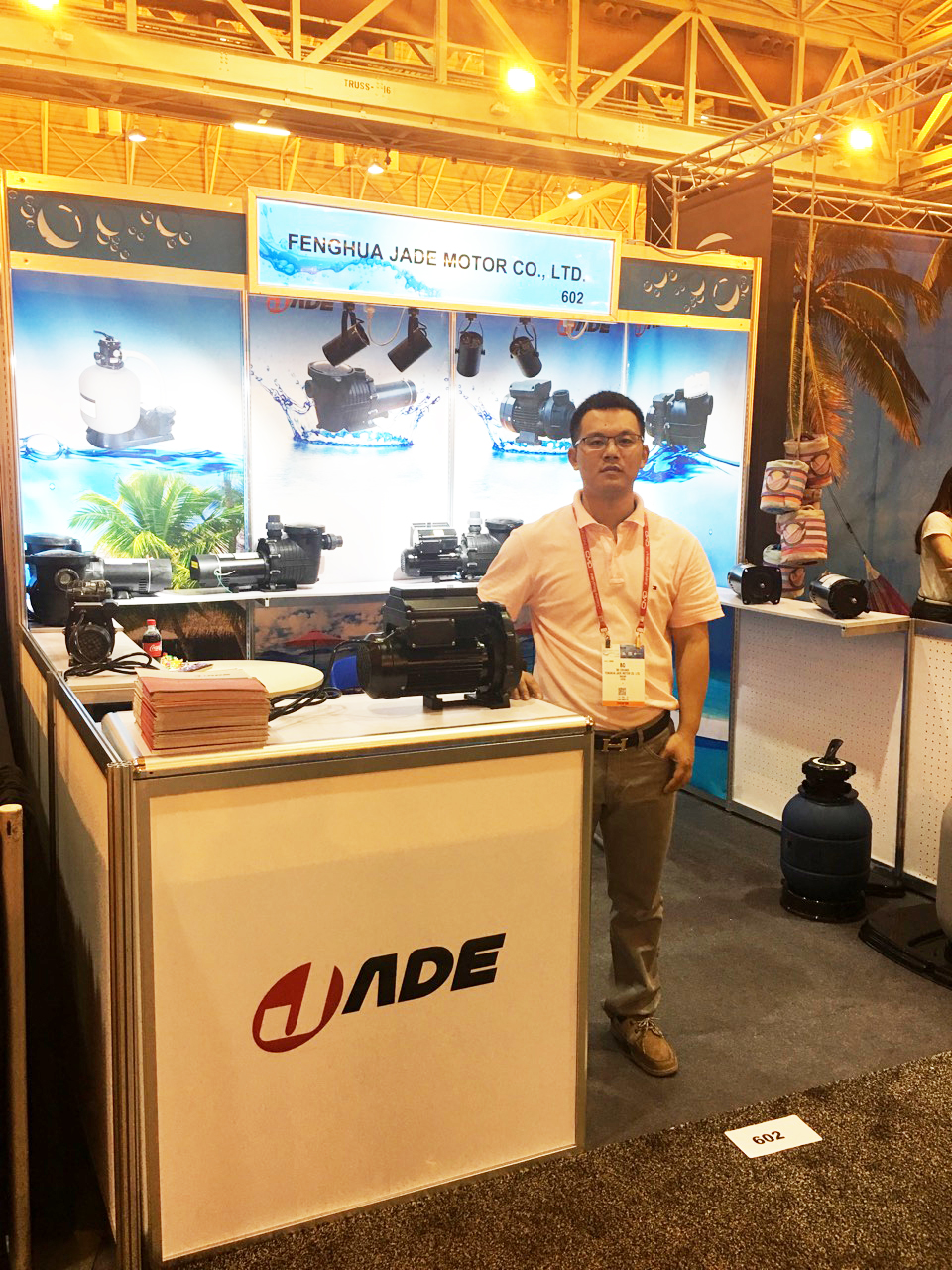 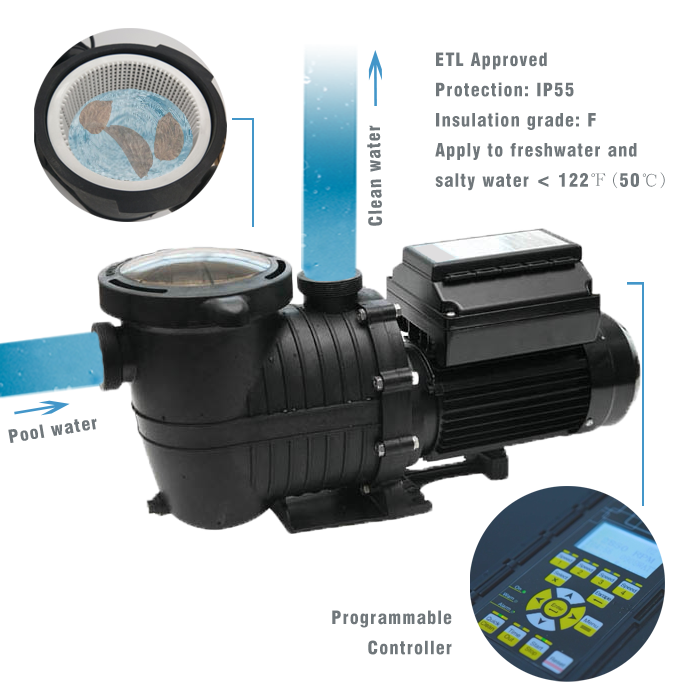 Developed in 2014, this variable speed pump is one of Jade’s high technology products.

Lucky to the customers who saw the physical object in the expo. It doesn’t matter if you didn’t see it at anywhere, sample is available at any time and here’s some instructions for you:

It allows user to set three speed for manual mode and set three cycles for schedule mode within 24 hours ranging from 450 RPM to 3450 RPM.

For more details, please feel free to let us know at info@jademotor.net or fill the form below.

Fill out my online form. 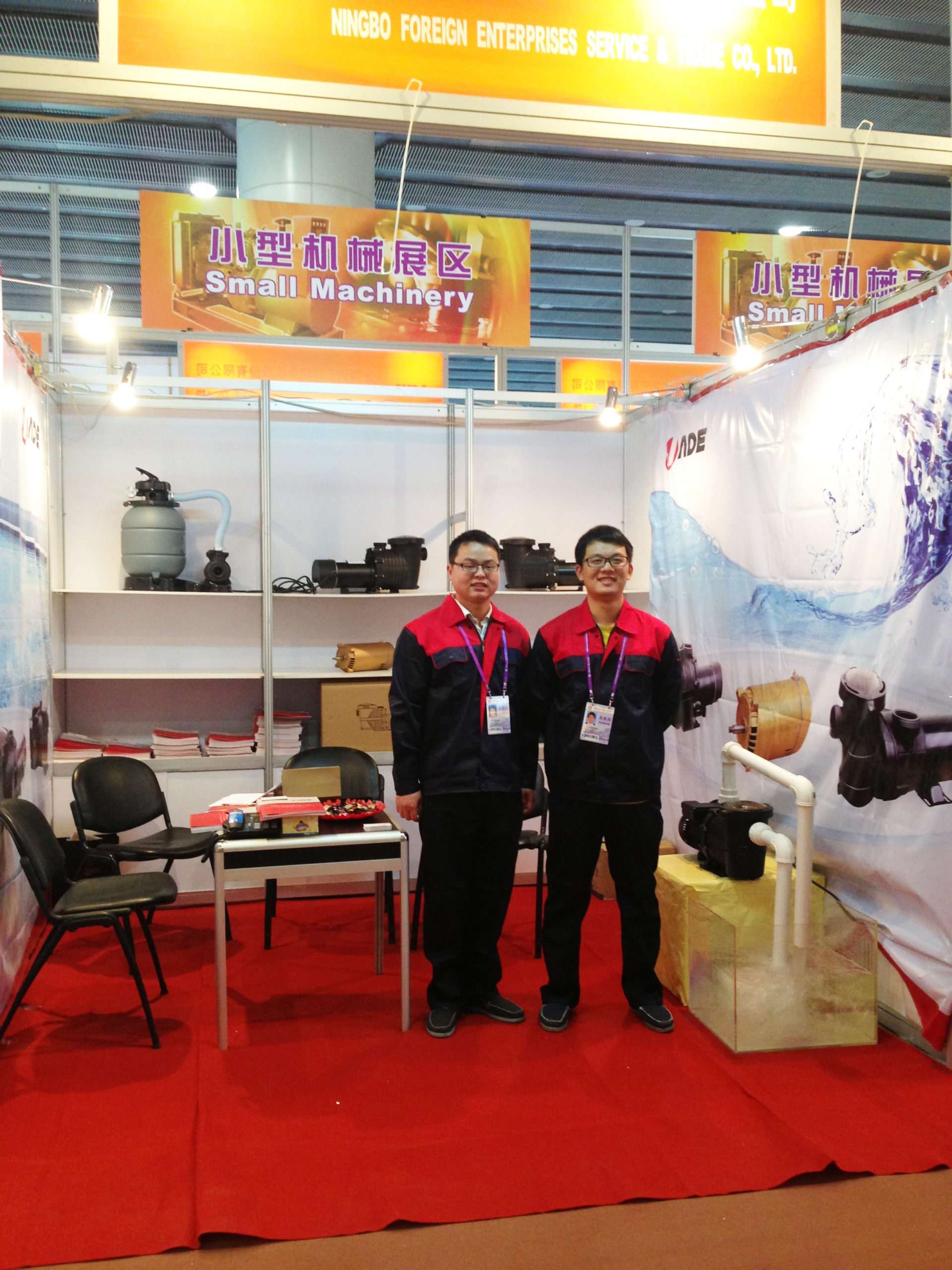 This is the first expo Jade has ever been participate in, with out key product — Swimming Pool Pump, Jade won some customers who are quite professional in pool industry.

We don’t have many product type, Jade only focus on swimming pool pumps, which makes us very acknowledged in pool pump research.

We have pool pumps for all pool type and size, please feel free to let us know if you have any interest in Jade products.

Fill out my online form. 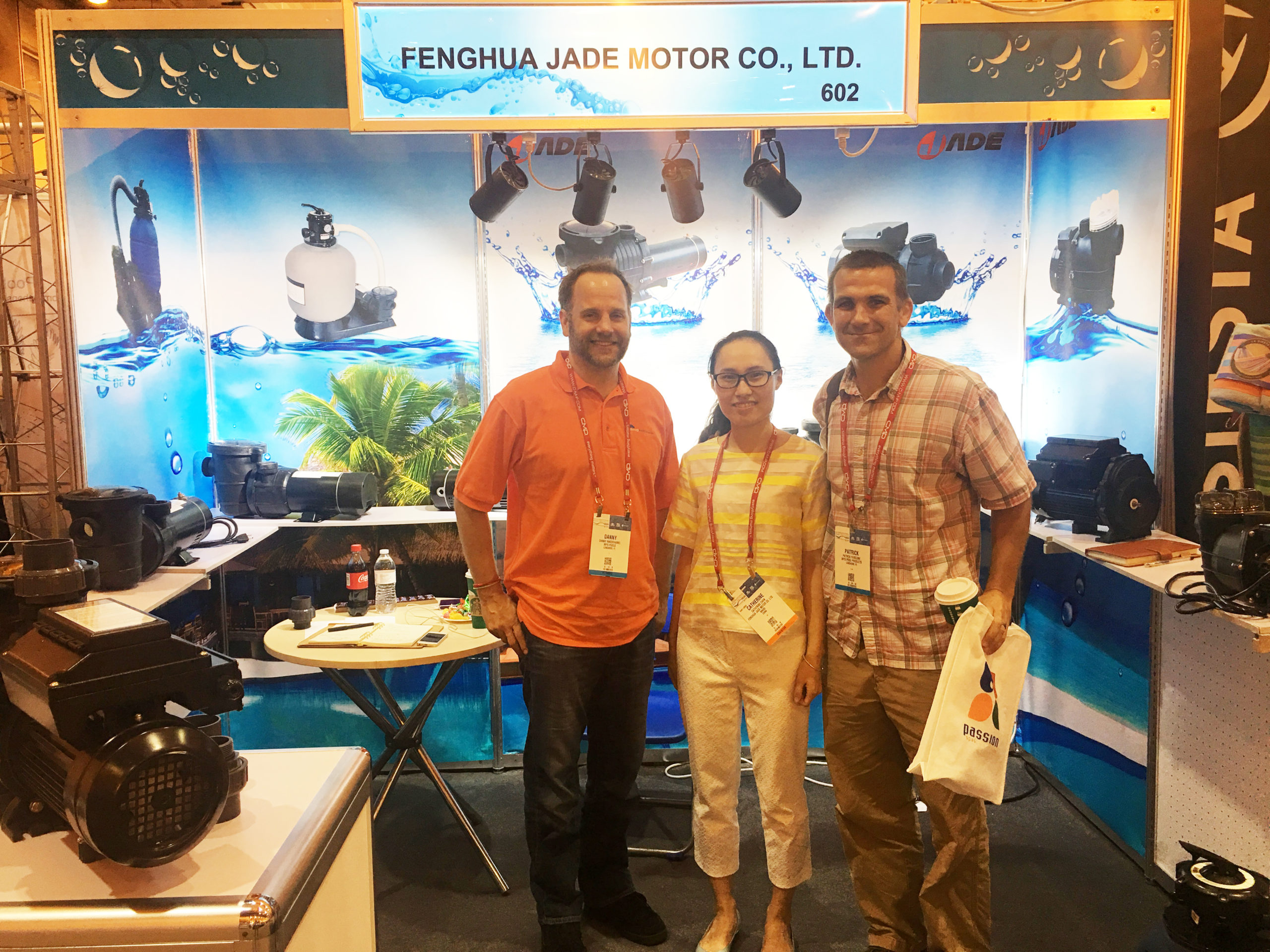 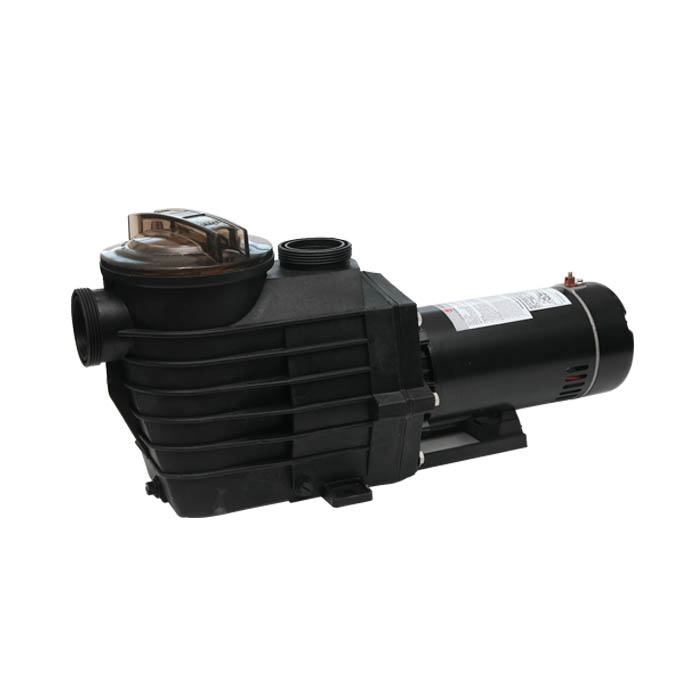 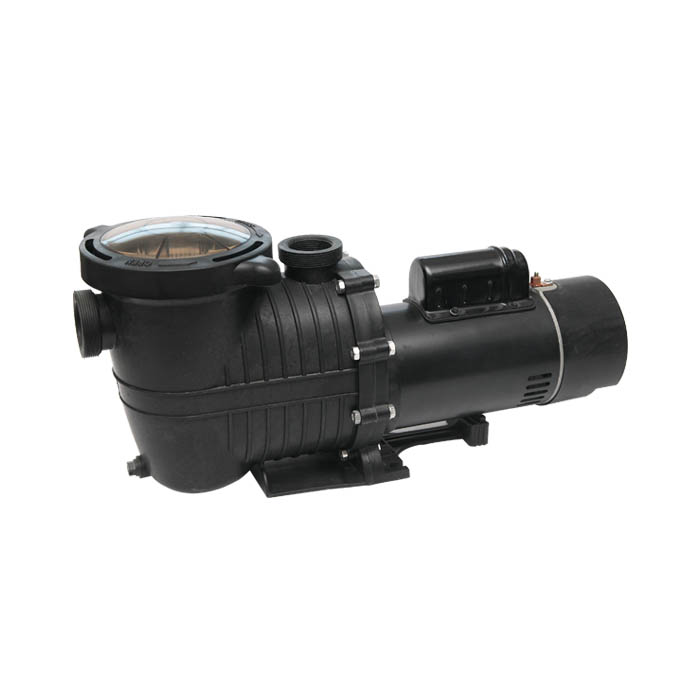 We are willing to and have the ability to develop unique products for our customers, why not contact us now?

As a pool owner, you want an energy-savings, environmentally-friendly swimming pool. You may wish you could easily estimate your energy and cost savings before purchasing a pool pump. Fortunately, this is all possible with the new weighted energy factor scheme! The new weighted energy factor regulations from the Department of Energy (DOE) will make it even easier for pool owners. Here is what you should know.

What is weighted energy factor (WEF)?

WEF ratings are very similar to how we measure the efficiency of a car in miles per gallon (MPG). A WEF rating will allow you to see and compare the energy efficiency of different pool pumps so that you can make an informed choice when purchasing. The higher the WEF rating, the more efficient the pump.

When is this change happening?

By July 19, 2021, all newly manufactured pool pumps that are included under the new rule must be tested and labeled with their WEF rating.

What does this mean for pool owners?

By establishing a WEF rating, your pool pump shopping just got easier. You will now have the tools to easily evaluate and compare how efficient new pumps are. In turn, this will help you reduce the energy you consume to run your pool, resulting in much lower monthly energy bills.

What does this mean for pool pump distributors?

Well, why not hurry up to look for a cost efficient and energy efficient variable speed pump and grab a spoon from this opportunity!

Here’s a good choice for you!

For more details, please feel free to contact us at info@jademotor.net

Why do I need a variable speed pump?

You may find answers in this blog:

Here’s some summary of the article

Are you wondering if it is worth it to get a variable speed pump if you live in an area where you pool is not open year round? This is an argument that I see being raised whenever I post a video or article talking about the advantages of getting a variable speed pool pump. It used to be that the most commonly sited objection was that “I only run my pump for a few hours per day” which implies that a variable speed pump would not have any savings in this circumstance. In response to this objection I wrote an article that breaks down this comparison to show that variable speed pumps are better even under this extreme filtration example. You can watch the video and see this detailed breakdown in this article about running a pool pump 4 hours per day.

As shown in that article running your pump for even a few hours at maximum speed will use more power than a properly scheduled variable speed pump. The drop in power consumption as you reduce the RPM of the motor is so significant it can reduce electrical costs for filtration on pools that have even the most scant filtration schedule. This leads me to the point of this article, in that it is common to see people say that seasonal pools will not benefit as much from variable speed pumps as pools located in a year-round environment. I believe this is a matter of perspective and variable speed pumps are just as important on seasonal pools as they are on year round pools.

Variable speed pump costs – The first item to clarify is pool owners often say that a variable speed pump costs $1000(Jade variable speed pump cost is far below this amount, send inquiry to get the lastest price) so how long will it take to recoup this cost? My problem with this statement is that it completely ignores that single speed pumps are not free. You need a pool pump no matter what and even though a variable speed pump is more money than a single speed pump to buy, it is the difference between these two numbers that you should be concerned with when making this comparison. It is also worth noting that the cost of variable speed pumps in general has been reducing steadily since they hit the market a decade ago. While some of the larger and more expensive models are well in excess of $1000 to buy, these would also correspond to very high end and fancy pools with a lot of features that need to be run by the pump. Expensive pools need expensive pumps and this should be a surprise to nobody. On the entry level of the market there are now many variable speed pumps that are far less than $1000 to buy. An example of this would be the Pentair Superflo VS pump which is (as of this writing) for sale on Amazon for $729 where the single speed version of this pump is $428 which means the difference in price is only $301 and not $1000 or more dollars.

A 25,000 gallon pool in a cold climate area of Canada and a 25,000 gallon pool in Florida both require a similar amount of filtration as established with the industry standard of three to four turnovers of a pool being required every 24 hours. This means that upgrading to a variable speed pump will have the potential to save the exact same amount of electricity for both of these pools. As shown by manufacturers of VS pumps, and from articles like this one about how much power does a pool pump use, pools with single speed pumps can reduce electrical use by as much as 80% to 90%. It does not matter where the pool is located, or how many months per year the pool operates, each pool has the same ability to benefit from upgrading to an energy saving variable speed pump.

Both seasonal and year round pools benefit from variable speed pumps – Even though it will take longer for a pool in a colder climate to recoup the investment in their variable speed pump, a pump that only operates for half the year or less will still be in operation long after a pump in a year-round climate has reached the end of its service life and required replacement. Of course all of this is a moot point since as of July 18, 2021 it will be law for all pools to have a variable speed pump for the filtration pump (or a pump that meets an efficiency requirement that currently can only be fulfilled by variable speed pumps). This means when your current pump fails you will be required to upgrade your pump. This is not a move to save you money on electricity. The fact that you will save a substantial amount of electricity is secondary to the point of eliminating wasteful, energy hog appliances that have better option available. Thinking green starts at home, and arguing against variable speed pumps reveals that you have not done the math on the electrical savings potential, and refute changes that undoubtedly will improve the energy footprint of owning a swimming pool. Variable speed pumps are useful on every swimming pool that currently has a single speed pump regardless of where that pool is located, and how many months per year you get to use it.